In the fall of 2007, a 23-year-old named Adam Conner left his job with Virginia Governor Mark Warner’s Forward Together PAC and set up shop as Facebook’s first lobbyist in Washington, D.C. Working out of the living room of his apartment near the city’s convention center, Conner spent his time visiting members of Congress and government officials, teaching them how to set up official Facebook pages and offering them tips on how they could be used to engage constituents. 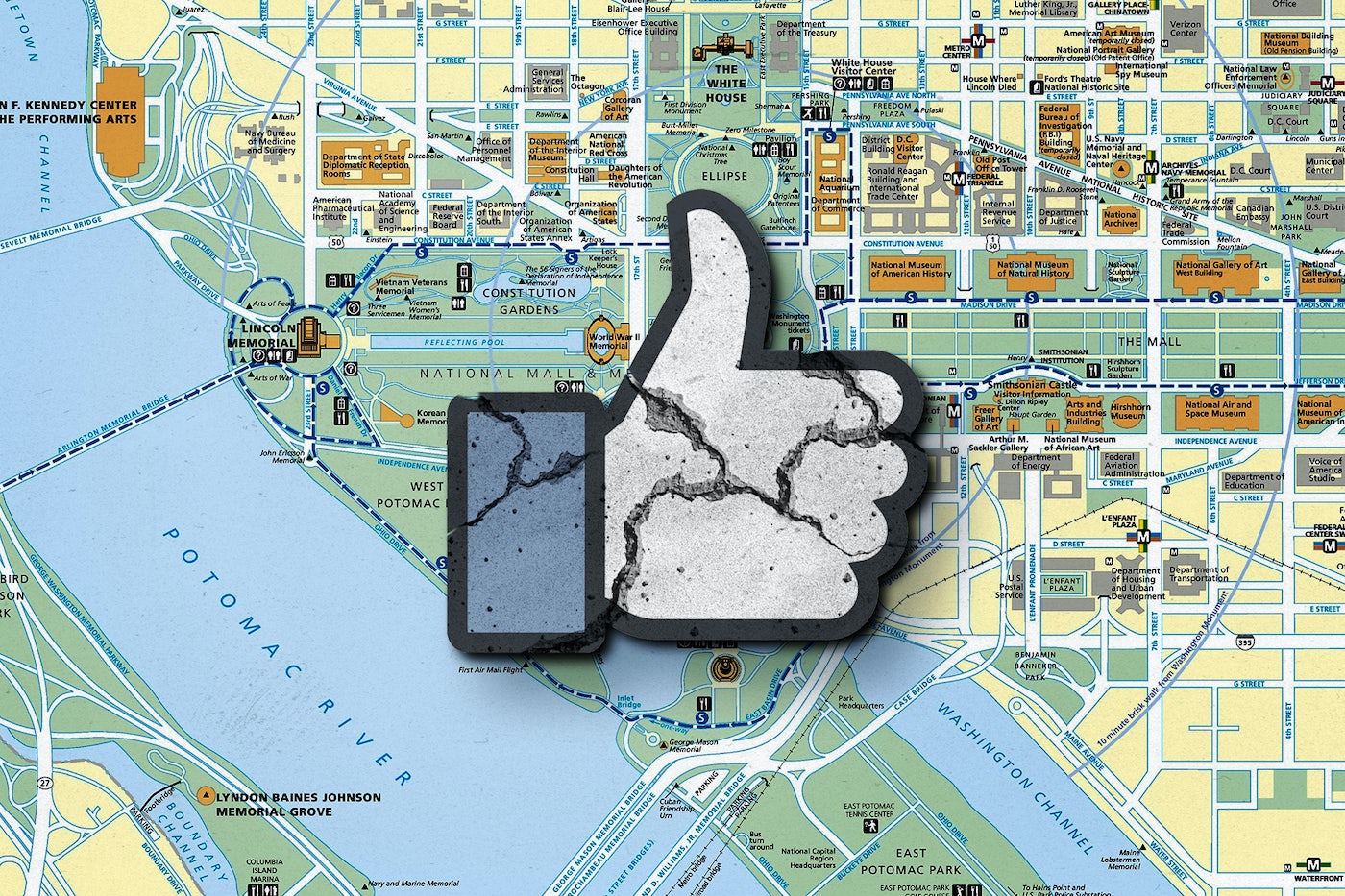 Although the social networking platform, which was then only three years old, was already an online powerhouse, ranking eleventh in annual web traffic, politicians knew very little about it, other than a vague notion that Facebook would help them reach young people. At the time, some elected officials might have expressed concerns about privacy, but judging by how many were signing up, none ever thought: If I want to engage with my constituents online, why am I making them give all this personal data to a private company in order to interact with me?

Back then America was in the middle of what looked like a civic renaissance. Tens of millions of people were going online to “join the conversation” in the blogosphere. Millions more were getting directly involved in politics. (The number of people making a small donation to a presidential candidate rose sevenfold between 2000 and 2004, for example.) Today, most of that activity has been captured inside Facebook, which, of the four major tech monopolists (Google, Amazon, and Apple being the other three), is the one that should concern civic activists the most.

With 68 percent of Americans currently using Facebook, it has become the nation’s de facto digital public square, at least in part because the country’s political leaders lacked the civic imagination to insist on a public alternative. With their tacit approval, Facebook built a giant garden for its users, walled off from the open internet. And then, taking advantage of its popularity, Facebook started copying and replacing older public forms of civic engagement with new ones that only live inside its platform. Think about it: To participate in a politician’s Facebook group or a Facebook town hall meeting with an elected representative, you have to be a member of Facebook. Imagine being told that to attend a public meeting of your school board or to join a local community organization, you had to agree to let a private corporation amass a dossier about you.

Politicians and public officials were complicit in Facebook’s legitimization as a political forum. Special credit has to go to Barack Obama, as a presidential candidate in 2008, for demonstrating that a power base located on Facebook could take you all the way to the White House. A tip of the hat, as well, to digital organizers, who justified building movements on Facebook “because that is where all the people are.”

This is a problem not only because Facebook is addictive and seems to make people sadder the more they use it, and because its algorithms prioritize content that rewards emotional engagement, thus fostering filter bubbles, political polarization, and the dangerous spread of misinformation. It’s a problem because democracy cannot function inside a surveillance machine. Even if you aren’t on Facebook, your world is being powerfully warped by its dominance, to the point where Americans now have trouble imagining a civic life that exists outside its systems.

The Internet was originally a public good, built with taxpayer dollars that supported the early research that created its protocols and the nonprofit communications backbone that allowed millions of people to start connecting to it. But in the 1990s, it was largely privatized, with MCI Worldcom, GTE, AT&T, Sprint, and Cable & Wireless eventually taking over the job of managing its infrastructure. As Ben Tarnoff pointed out in an August 2016 article in Jacobin, when one commercial operator was given permission to start carrying commercial traffic on the internet, a competitor complained that this was the equivalent of “giving a federal park to Kmart.”

Unfortunately, there was at the time no civic equivalent of the environmental movement for digital. Free-market ideology was dominant among the politicians of the day, Clintonian New Democrats and Gingrichian libertarians alike. In 1993, Vice President Al Gore, who did the most of any elected official to foster the internet’s growth, said in a speech at the National Press Club that “information highways will be built, paid for, and funded principally by the private sector.” (On the day of his speech, the Democratic National Committee collected $15,000 from Sprint; $10,000 from U.S. West; $50,000 from MCI; and $15,000 from NYNEX, now known as Verizon. The next day the DNC got another $20,000 from MCI and $10,000 more from NYNEX.)

So instead of protecting this new “federal park” from commercialization, America’s leaders gave the job of stewarding the internet to private corporations and invited them to build it as a hub for commerce. Alas, the late, great John Perry Barlow was proved wrong in his famous manifesto: Cyberspace was not, as he wrote, “a global social space ... naturally independent of the tyrannies” of “flesh and steel [governments].” It was actually a new kind of privately owned space, like a city built without public parks or amenities of any kind, other than a scrappy nonprofit library called Wikipedia. Powered by billions in venture capital, and unhindered by meaningful government oversight, Mark Zuckerberg built Facebook into the leviathan it is today.

Alternatives exist. For the last few months, I have been quietly lurking on an online discussion board for the town of Middlesex, Vermont, population 1,781. A daily stream of posts written by people using their real names have floated by, at a pace of roughly five to 15 per day. There have been a few dozen posts about candidates for the local school board election, plus a smattering of other ones related to civic functions like the annual town meeting that took place in March. Dozens of posts have offered free goods, ranging from beds to firewood, unused children’s toys to Final Cut Pro editing manuals. Twice, people have reported their dog lost and then found within 24 hours; once, someone reported spotting a lost pair of miniature horses, also returned to their rightful owner within a day.

All across the state of Vermont, in every town, there is an online forum like this one. They are run by a local company called Front Porch Forum, which was founded in 2006 by a husband and wife duo living in Burlington. Of the roughly 260,000 households in the state, 150,000 belong to a forum connected to where they live. A typical one has about 1,000 households, and people spend about 10 minutes a day engaged with the site. It’s free, but to join you have to verify your home address. An independent survey of 13,000 of its users found that using FPF made them more likely to trust and cooperate with their neighbors and more likely to participate in civic life. The top reason people gave for visiting the site regularly, co-founder Michael Wood-Lewis told me, was the opportunity to “witness daily small acts of neighborliness.”

People need online forums to hold their social identities and help foster connections between friends, neighbors, and the larger society.

Front Porch Forum isn’t the only example of an organization that uses digital tools to build consensus and drive policy solutions: Platforms like SeeClickFix, OurCommonPlace, PlaceSpeak, and Neighborland have all been founded within the last decade or so to build a digital public sphere. Each can claim user bases in the hundreds of thousands. Unlike Facebook, they aren’t trying to vacuum up all the data they can and monopolize people’s attention in order to make billions in online advertising. FPF, for example, is deliberately designed to keep provocative statements from turning explosive, with paid moderators who review every post. Of course, there’s little chance these organizations can take advantage of Facebook’s recent difficulties and convince consumers to shift their allegiances wholesale.

But in the same way people need banks to hold their money safely and to help it circulate, creating businesses and jobs, they also need trustworthy online digital forums to hold their social identities and help foster beneficial connections between friends, neighbors, and the larger society. The question Americans now face is for whom and on what terms will those forums be built and how should they be maintained? What platforms like Front Porch Forum demonstrate is that there are many ways to answer these questions, and the effects of online public forums do not have to be the ones lawmakers are now grappling with thanks to Facebook’s focus on growth over every other value.

How can we even begin to tackle such a big problem? Government agencies and elected officials can take the lead by shutting down their Facebook presences, at least until the company radically changes how it handles user data. The large civil society organizations that use Facebook, such as PETA and the AARP, can step up to demand more of the company, too. But if Americans truly want a digital public forum centered on the needs of the citizenry, it has to be built and maintained the same way they’ve built and maintained America’s national parks—as public goods open to all.